The busiest place in Questa last Friday night wasn’t a basketball game or restaurant. Instead, it was the Questa Public Library, where dozens of patrons and longtime reading advocates gathered to celebrate the last 10 years, taking stock of how far the library has come and how far much further it can go.

At the celebration Friday (Jan. 19) evening, kids sat in a circle for story time and made birthday cards for the library. Platters of sandwiches and cookies brought together current and former board members, politicians and volunteers, as they milled through the one-room library and its shelves filled with classic works of literature and the newest releases, fine art books, movies and magazines.

As Mayor Mark Gallegos said, the library has become “a home base for the whole community.”

Gail Buchanan, Judy Cuddihy, Esther Garcia and Kimber MacDonald formed the initial group of library advocates. They started meeting in the fall of 2003 to chart a path to get a library in a part of the county that had never had one, other than in the schools and a monthly visit from a bookmobile.

“We thought Questa needed to have a place for people to gather, to read and access computers,” Cuddihy told The Taos News . They did it, she said, to build vital infrastructure in the rural community and, simply, for the love of reading.”

The next year, the village council threw their support behind the idea, and the founding team got to work soliciting donations. Pojoaque Pueblo gave them the building and books started pouring in. Money, however, did not.

Nevertheless, the team persisted in pulling together funds and support and making the space into a proper library. They sorted and cataloged hundreds of donated books.

Carolyn Anderson, who was hired as the village’s first librarian, recalled walking into the basic metal-sided building and thinking, “This is a classy joint.”

Not long after, Questa Public Library finally opened to the community Jan. 19, 2008.

The community support in the decades since are plain to see in the numbers, said current librarian Sharon Nicholson.

While books are obviously the staple of any library, computers have become even more important. The library has updated its computers twice in the last 10 years and has seen computer visits jump from 797 in 2008 to a bit more than 1,400 in the last fiscal year. And that’s just inside the library — last year, people got on the library’s wifi, many from their smartphones in the parking lot, exactly 1,344 times.

Tracking this sort of data is important for a small library that started with no budget and a skeletal crew of volunteers. Because of the increase in users, the Questa library received recognition as a fullfledged library in 2014, meaning it now gets bond money every few years like the Taos Public Library and the library at UNM-Taos.

“I think we’ll continue to grow and continue to be a center of the community,” Nicholson said.

In a rural outpost like Questa, being the “center of the community” isn’t figurative. Beyond the classes and programs for kids, such as parties for Halloween, Thanksgiving and library birthdays, the library is also a drop-off for everything

from Amazon packages, boxes of mason jar lids and envelopes of vegetable and flower seeds.

At the same time, the Questa Public Library has never been restrictive about geography, Nicholson said. The library serves village residents, folks from Red River and the other communities in the northern part of the county. And the library is the closest for residents in Garcia, Colorado, across the border from Costilla. They certainly use its services, Nicholson said.

Because of the “phenomenal increase over the years,” Nicholson said, founding members and a decade’s worth of library boosters are pushing for the next logical step: more space.

Next to reading-themed posters and picture collages on the walls are the architectural plans to double the square footage of the library. The proposed addition would add a small amount of office space (the librarians currently use a table in the middle of the room) and areas for people to use their personal laptops or gather for meetings, clubs and events.

And, of course, to read.

The sun sets over Questa Public Library where the friends of the library held the institution’s 10th birthday party Friday (Jan. 19). The library is set to get a large addition in the near future.

Judith Cuddihy, a founder of Questa Public Library, was given a bouquet of flowers at the library’s 10th birthday party Friday (Jan. 19). 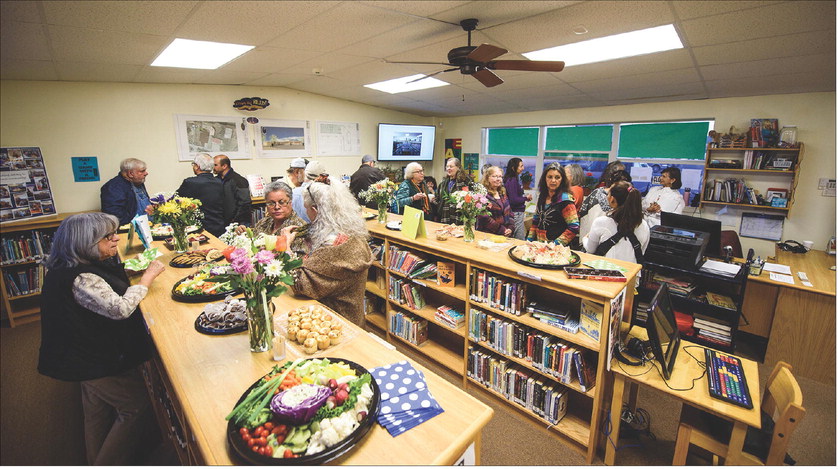 Where to find us

6 1/2 Municipal Park Road, Questa, NM 87556 Your Library is located just off Route 522 next to the Questa Youth and Family Center and just north of the Questa Health Center.

How to Get Here